Bellona build and guide this guide will go through explaining the items and their purpose, her abilities, and her own pros and cons. I finally reached Rank X with her and i have to say I'm happy. It took a lot longer that I expected to be, but still I'm happy that my favorite Goddess in SMITE is rank X. So I hope you like this guide, and I'll see you guys later. 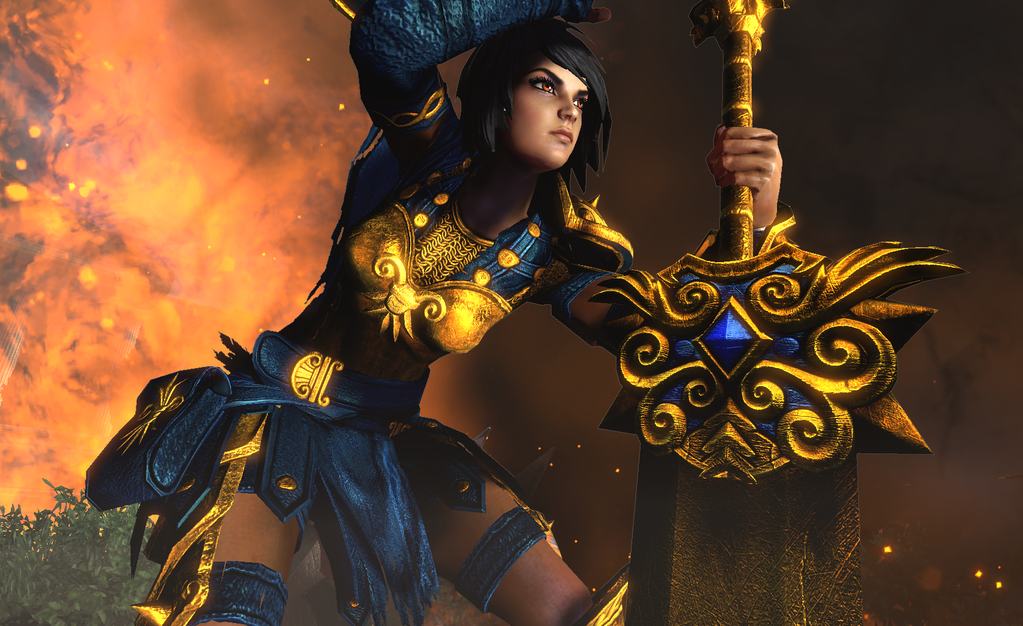 Passive - Master of War
An buff that gives you Protections and Movement Speed. This makes

Bellona so annoying as hell. This buff gives

Bellona extra protections and movement speed allowing her to catch up to her prey and allow to box. So don't be afraid to attack people you probably could survive and win the fight with her annoying passive.

Ability 1 - Shield Bash
A cone attack that deals damage and applies a slow. This ability is actually two types is a dash and a cone. This is usually your starter going into fights allowing you to deal initial damage and a slow that allows to be followed up. This move also have a other function. For a 30% chance you get to block damage allowing to not take damage from incoming basic attacks this does not work for abilities so be careful of that.

Bellona's main ability this where all the damage comes from. First this hits all enemies in a area building up damage in the slam damage. The slam where all the damage is from every enemy god hit you build up bonus damage that applies to your slam allowing you to do massive damage. But this move could get countered by any CC so especially be careful of

Mummify is the ultimate counter against

Ability 3 - Scourge
An line attack that deals damage and disarm enemies. This a interesting move for

Bellona being how much utility it has. The first part what makes it great it's disarm. This CC effect prevents enemy gods to use any basic attacks for a short duration. allowing you to get a advantage on gods that are more basic attack based, like

Kali. The second part that every third successful basic attack hit gives you healing. This heals if not that much but this is great for sustaining your health for clearing minion waves. The last utility part is you get extra range. This what makes this ability unique. This buff gives you extra 4' of range giving you a longer distance poke than other melee gods, allowing you to control a melee fight with ease. This ability works well if you have

Ability 4 - Eagle's Rally
An leap attack that applies damage and gives buffs to teammates. This move is a killer and i'm not joking it is. This move what makes

Bellona the biggest threat ever for warriors. The reasons why are it's damage, stun, and it's cooldown. The stuns is not that long for usual stuns but it is a great setup to all of your other abilities. While the buffs are not usually used by the move is still a great add on to kill enemies in that radius. And it's cooldown if you get

Breastplate of Valor and

Jotunn's Wrath the cooldown of this ability is 30 seconds. So mostly every time and enemy sees you expect a flag landing on their head. So if you combine others moves with this you are determined to confirm a kill. Here is my Season 4 upadte for

Bellona covering the Solo Lane and Joust showing the items making you a utter monster that trying to kill you is possible but it will be really hard though.

Bellona is more ability focused god frequently using her kit to take advantage of the map to claim victory for you team. So if you support your team in fights and try to be a annoying little thing you will claim victory match after match. So I hope you guys like this guide and I'll see you guys later.

Hemlocke | October 23, 2017 1:40pm
This build is overcap for CDR just a heads up. I ran it with success, but could drop jotanns for something else without CDR
1
[-]

Mantle of Discord before I dropped

Mantle of Discord due to the extra mana and CDR helps with her kit. Good other choices are probably

Bulwark of Hope and

Hide of the Urchin are good replacements for

Mantle of Discord. Is just determines if you want more CCR or more protections.
1
[-]

Bellona having no updated guides. So I stood up on the plate and decided I'm going to complete this guide. Couldn't do much work atm due to the internet where I am is not that great so I'll do more work on this guide in the future.
1
[-]

Sovereignty should be picked up by the main tank (which might be you, might not be). If there are two tanks, the other can get

Heartward Amulet for the main tank. If there are 2 tanks, the other can get Pest against healers, or a Guardian can pick up

Void Stone if there are mages on your team, etc., etc.

Balanced enemies? Is there good clear on your team and no healer? Get

Stone of Gaia, let teammates clear, and there, you have your crazy sustain. You might still consider Sov if there's no healer, for the HP5 it gives teammates.

But for Bell, I'd basically just build full tanky, with maybe just

DucksRock (41) | April 5, 2016 11:45am
I just wanted to note that there's no need to describe what the abilities do, As we can see it with the icons, also, if your going to make a skills section, use it to provide some tips although

Bellona dosent need tips because i dont wanna say it I ****ING HATE HER since just giving the ability description is pretty useless.
1
[-]