In case you want to find out exactly how much pen you're getting out of this item against an opponent with a specific amount of physical prots, here's the calculation:

Here's a chart showing the progression. 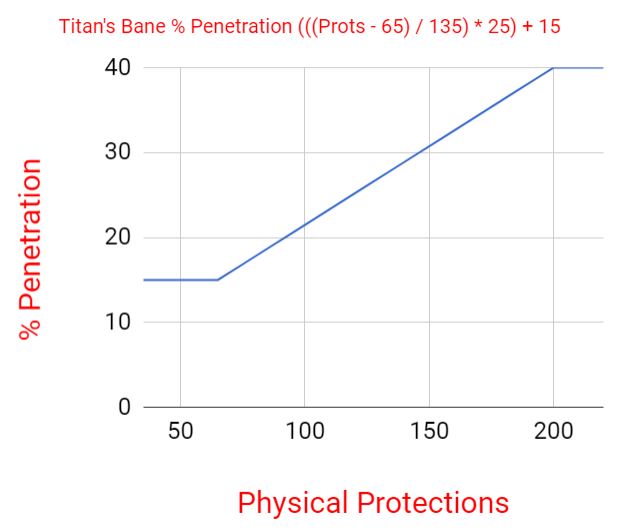 Note that this just gives you the % pen calc. You then have to use that value as a percentage (a value of 23% would be 0.23) and multiply that by the enemy's protections to get the flat pen value.

For squishies building 0 protections at level 20, you will usually get only around the minimum 15% pen. This is only around 10 penetration, making flat pen items like

The Crusher superior in effect.

It is also unlikely that all but perhaps 1 enemy in a balanced match will ever reach 200+ physical protection. That said, if an enemy gets even one normal physical protection item and their protection exceeds 100 at level 20, you'll get more pen out of TB than you would any flat pen item.
1
[-]

Bloodforge be more useful for dps?
1
[-]

Branmuffin17 (295) | May 26, 2018 9:34am
It's not an easy, straightforward answer. Let's make some assumptions.
So, if a squishy gets an item specifically for the protection, they're likely to hit at least 100 protections. As you can see from the chart, at 100, % pen exceeds 20%, which means 20 flat pen or higher, which is higher than any item containing flat pen (with the exception of stacking protection reduction from

So the ROI on TB should be pretty good IF the enemy gets protections.

Then you have to consider how much actual pen you have in other items. The closer you get to true damage, the more the damage ramps up. Individual god has to be considered too, because some scale VERY well with power, while others are only mediocre.

Against a squishy with no added protections, and if you have a couple decent flat pen items (

Bloodforge would have better damage potential, especially for a high scaling ability. I'd guess it's very similar damage output overall, though.

Bloodforge is a bit situational though. For consistent output against all enemies, TB still seems like it should be okay. To get the most out of BF, you need to get kills (for the shield), and/or you need to basic attack a decent amount (to get the lifesteal). If you're just going for the power, then you might be better off with a similar power item that has different benefit (e.g.

Transcendence (if not picked up earlier), all can be used in place of

Branmuffin17 (295) | May 26, 2018 10:06am
If considering any reasonable amount of damage against a tank as an ability user, I'd say TB is still important. Also, consider when you pick the items up. Trans is gotten early. You'd plan for it early.

If facing mostly squishies, I see BF and SS being late possibilities if you've gotten enough flat pen. TB sorta is weak against 65 prots. All depends.
1
[-]

Izanami build (in preparation for writing up my guide) and I was stuck on which would be better for her considering the nature of her normals,

Kriega1 (91) | May 26, 2018 11:34am
I've seen people debate this back on Smite reddit with some conflicting reports. Apparently her regular autos only apply the first stack of

The Executioner but this may be false and may have to be tested in game. However, I do know for sure that her passive works better with

The Executioner on her. I might try a bot match and see if I can tell a difference. And I've never been sure if she apply on hit effects like

The Executioner on her return strokes. I know she can crit on both parts of her basics but not sure if on hit effects work the same way.
1
[-]

Branmuffin17 (295) | May 26, 2018 11:54am
Easiest way to test would be in Jungle Practice with a friend. Check each hit's damage, and make sure the return also hits. If damage increases each time in 3 actual basics, then the return doesn't also stack. If it only increases the 2nd basic, then you know the return does stack.

I remember reading this too. And DB is another item I've heard doesn't actually work very well...suggested if you go the crit route has historically been

Malice, but that was before the major passive change.
1
[-]

But understand something: to counter flat pen, you literally just need to build ANY physical protection item. This is where

Titan's Bane is in a bad place right now. You should never build it together with

The Executioner (in your hunter builds). You'd honestly have much better DPS with a different item.

Finally, we're friends on PS4. If you catch me online, just IM me, and I'll gladly join you for some jungle practice where we can test some stuff out. I have a mic.
1
[-]