I haven't tested damage on her with Ninja Tabi over Warrior Tabi but I assume it's not worth with her 3 having nearly 100% up-time when it's needed and she has 4 scaling abilities with favorable burst.

The Crusher is decent enough on her since the 20% AS is never wasted (none of her abilities channel to prevent AA's for their duration). Penetration is Pele's best stat as it helps out all of damage equally and is already a great offensive stat.

Brawler's Beatstick is another option over The Crusher. It isn't necessary when the opponent has low sustain but the 15 Flat pen and the ease of applying it on her Ult makes it pretty good while against sustain it's pretty necessary.

*I had previously considered Hydra's Lament a poor option on her due to the interaction with her Ult and her 3 but it actually gives pretty good burst with specific combos. I'd like to thank Branmuffin17 for pointing this out to me.

Void Shield is really good on her since she's able to do a lot of damage in melee range and regardless of her safe ranged poke she can still be overwhelmed pretty quickly. Masamune was just a last second thought to tag onto the build for some safety and damage. Stone Cutting Sword can't build up stacks on her ult so I feel that Masamune passive is preferred. As for Basic Attack items and crit I don't see a reason to ever build these, even if you wanted to stick with a Hastened Katana or a Frostbound Hammer, you lose those effects on your 3 Ult AA's.

Substituting Defense or Utility items in place of Masamune is pretty good if you need survivability. In fact I wouldn't recommend going full damage if you aren't snowballing insanely hard and even so her late game would suffer. I didn't favor much CDR because her 1 cool down can be juggled pretty easily and her 3 doesn't benefit from it at all. Thoughts? This is my first Smite Fire post I have posted on other platforms in the past.

Magma Rush or the consecutive AAs from

Volcanic Lightning it's probably not good, but it should work VERY well with attack canceling multiple hits of

Pyroclast, IF you can get it all off.

Posted on another's Pele build, but...here's a different combo from what I stated on that one.

Eruption whenever the enemy is further away during the general combo.

As for the rest of your writeup:

Sorelopede | August 7, 2018 3:14pm
I wouldn't pass up The Crusher for any other item but if you feel like CDR is the way to go that's completely play style preference and I would suggest that you go for it. I was on the fence with Masamune but I feel like when you Ult you are putting yourself in melee range and if additional enemies are in range for her cone AA's they would also be boosting your Masamune passive.
One thing that I thought was pretty interesting with her kit is her abilities are really fast so if you build The Crusher even with a low amount of CDR you still utilize the attack speed pretty well. I find myself basic attacking a lot. You are right about Titan's Bane, I think I personally undervalue it after the nerfs because I'm typically focusing squishes when I play assassins. Do you think building Jotunn's Wrath over Brawler's Beatstick is more value into low sustain teams? And also should I prioritize a defensive item over Masamune in nearly every situation?
Is there a guide to how to use the site? I didn't know how to make a core build and situational items after and posting items like that in comments looks pretty helpful
2
[-]

Branmuffin17 (311) | August 7, 2018 3:33pm
I can understand the pref for MS from Masa. And it's not that it's a bad item...it's a great item...but I feel that you typically wouldn't want to dive into the middle of a fight where you'll get all 5 stacks of protections. Rather, in a teamfight, you'll poke with your 1, and when you find an opportune time, you'll then dive in for a specific kill. But some protections are better than none if you're looking for the MS and good power contribution.

Titan's Bane myself these days. It's so nerfed from where it was...no more pen against objectives, and relatively mediocre against squishies. But if you're going with a single strong pen item, it's still going to be your most effective option overall, unless facing a full squishy team.

Jotunn's Wrath, I think I value it more when you've only got 10% CDR in your entire build. 30% CDR is a nice spot. If you had 20% from SE and another item, then I'd probably say it's not as important...and of course, it's preference.

One other thing to consider about

The Crusher...if you're getting multiple hits out of her 1, that passive is just going to reset, rather than stack. In a high power build, it'll be nice in general even though the scaling isn't great, and of course, as you say, you're finding that you're using basics a lot...sounds like it fits well for your playstyle.

I would prioritize stronger defensive items over Masa when you find the need for it...not necessarily for every situation. But if you're facing strong CC, you'll probably appreciate the added protections and/or

Sorelopede | August 7, 2018 3:52pm
Makes sense to me, great stuff. I didn't know The Crusher passive reset on her 1, I went into jungle practice and it's getting 4 ticks when I spam it twice. I tested Hydra's and for running down a single opponent that burst is pretty nuts gonna update my analysis I didn't consider chaining 1 into the knock up. Actually can't believe I overlooked that interaction.
2
[-]

Taken from my Ganesha guide... 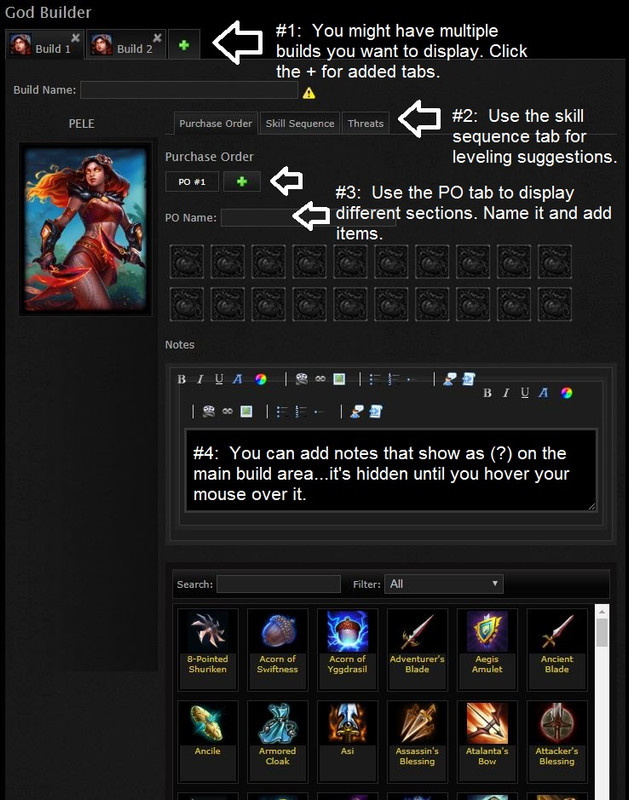 How it Looks to everyone 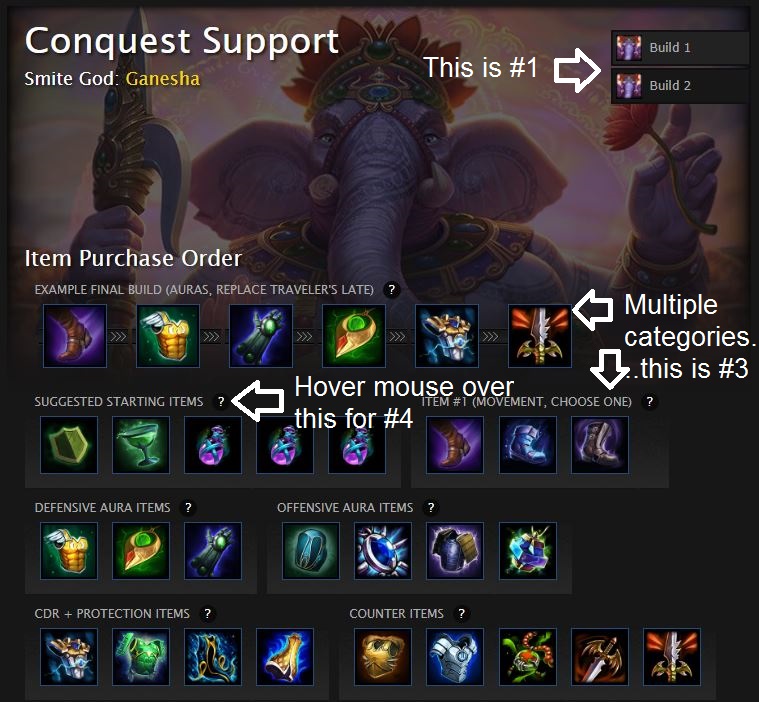 As for #2 (skill sequence), that's easy to figure out. Didn't include that because it's below the item listings.
1
[-]

Wayne3100 (45) | August 7, 2018 3:35am
Sorelopede wrote:
Substituting Defense or Utility items in place of her Brawler's or Masamune is pretty good if you need survivability. In fact I wouldn't recommend going full damage if you aren't snowballing insanely hard and even so her late game would suffer.
Am I interpreting this wrong or are you saying that you wouldn't normally end up with the hypothetical build in the cheatsheet, because either

Masamune would be replaced by another Defense/Utility item?

Also curious as to why you haven't mentioned

Titan's Bane (in a build without

Void Shield, preferably) if you consider Physical Penetration a key stat for her.

Finally, what are your thoughts on

Sorelopede | August 7, 2018 2:57pm
They are flexible depending on what you feel you need to do to perform well late. The hypothetical build is completely viable. Void shield I think is in a very good spot for most assassins I personally don't build Titan's Bane unless the enemy comp is tanky. As for her skill order I think that starting with a point in her 3 is the way to go, but using it mostly for movement speed after that since her 1 clears very efficiently. I would go 3,1,2,1,4 max the 1, max the 2, and put a point in her 4 whenever you can.
Loading Comments...
Load More Comments