Hello I'm back and almost ready for season 5

Views: 1389 BestMinionEver
+Rep | Report
So I am back again for the hundredth time. Hopefully Smite can hold my attention for a few months this time. Feels nice to start fresh on a new season, so the possibility is there! :)

For the moment I am just chilling here on the forum, because I am totally hooked on Divinity Original Sin 2. So my gaming time is spent on that for now. Think I have started 5 characters on that game now..

Earlier I was scrolling through my Ne Zha guide just to see how much work it would be to update it and found a hidden Easter egg that I didn't know about.

just to make sure you see it, it is Inuki on the Ymir. :P 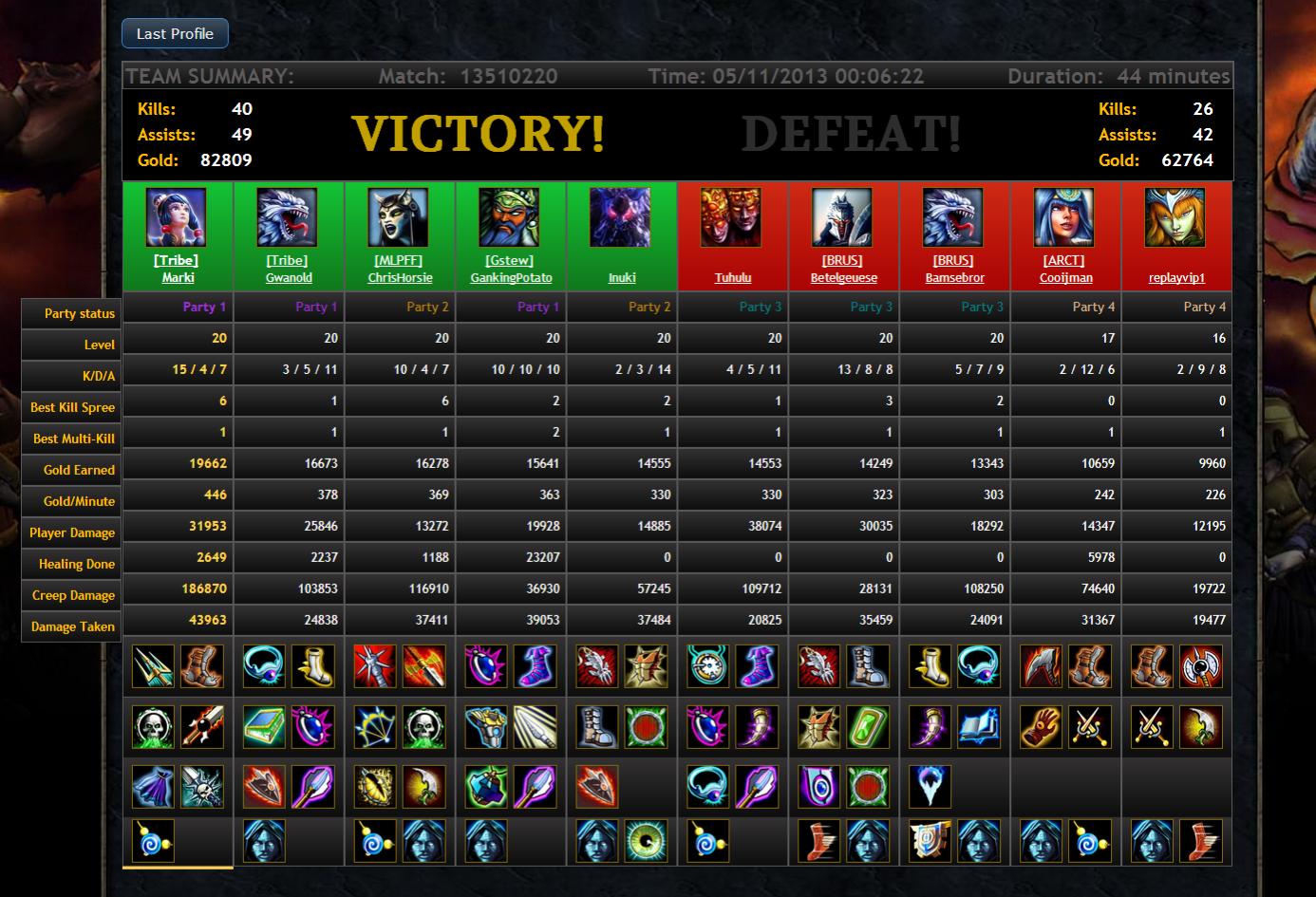 But I don't see myself ever actually managing to update that monster. I will give it the good old college try though.


I am not sure what I want to do when I make my way back to Smite.
I probably should play some casuals before going into ranked and doing my qualifiers. The plan is to at least record all my qualifiers and make a miniseries of them. Kind of feel like just jumping strai…
Read More
Comments (2)

Views: 1499 BestMinionEver
+Rep | Report
So just wanted to write a short post on what I'm up to for the moment. :-)

I havenot played much Smite the last 2-3 weeks. And I can't remember the last time I was on Smitefire..

It's pretty busy at work, so pretty knackered when I get home so haven't felt up to tryharding in ranked.

For the most time I have been just catching up on some series and rewatch some with my girlfriend, Into the Badlands, Black Flag, The Shannara Chronicles, Taboo, Fear the Walking Dead, 12 Monkeys, Killjoys and Ray Donovan probably forgot some series as well.

And pretty much all my gaming time has gone to Magic the gathering, which a friend got me into a while back ago. I played tje old steam games before, but I have now started playing paper format. And I am having a ton of fun, just watching draft videos and playing some magic online to practice for Friday Night Magic drafts at the gamestore. :p

But the last couple of days has gone to playing Middle-earth: Shadow of Mordor (yes the first one). I neve…
Read More
Comments (6)

Views: 610 BestMinionEver
+Rep | Report
So today I actually recorded every game I played.
And I tried to comment along the way, but I am really really really really bad at talking to myself.
The first game I gave someone jungle and played ADC (because he said he would carry, it went terribly bad...).
I forgot to record my last Odin game (phew, I played like ****) and I forgot that I was recording my last game. But all in all a decent day:

So after checking out my recorded games today I figured out that I was to drunk yesterday to realize that I had unplugged my mic...
I will give commenting during the game a new attempt later tonight or tomorrow >_< Views: 595 BestMinionEver
+Rep | Report
Odin  |  Ranked  |  Smite
I recorded this game yesterday, it is nothing special. I didn't really do any huge mistakes, but I didn't make any huge plays either.

analyzing the game
First of I was really unsure about what to get as my active. Thought

Ao Kuang.
It did end up saving me once I belive and it made me able to play agressive at the right mid harpy at the start of the game. But I was not impressed.
Me and

Ra where off to a great start securing the elementals and both mid harpies.
I got off a spicy

Ra decided not to help with my speed for some reason (I guess I could have shared the mid wave). That sat us back a bit (because we should have been close to solo lane, due to our dolo laner being very low), but

Ra played selfish and he kept playing selfish pretty much the rest of the game.
So I already mentioned that our s
…
Read More
Comments (2)

Views: 387 BestMinionEver
+Rep | Report
|  Analysis  |  Blog  |  Games  |  Progression  |  Ranked
So just for fun I wanted to try and make a blog updating my progression in ranked. Pretty much just breaking down the games I play. Thinking that the bast way will be to just use spoiler so hide the previous days or something. We will see how it goes. And everyone who is interested in following can just subscribe to it (no idea how that works), but don't want to spam the sight with a new blog every day I play ranked.

So lets get right to it:

The road so far 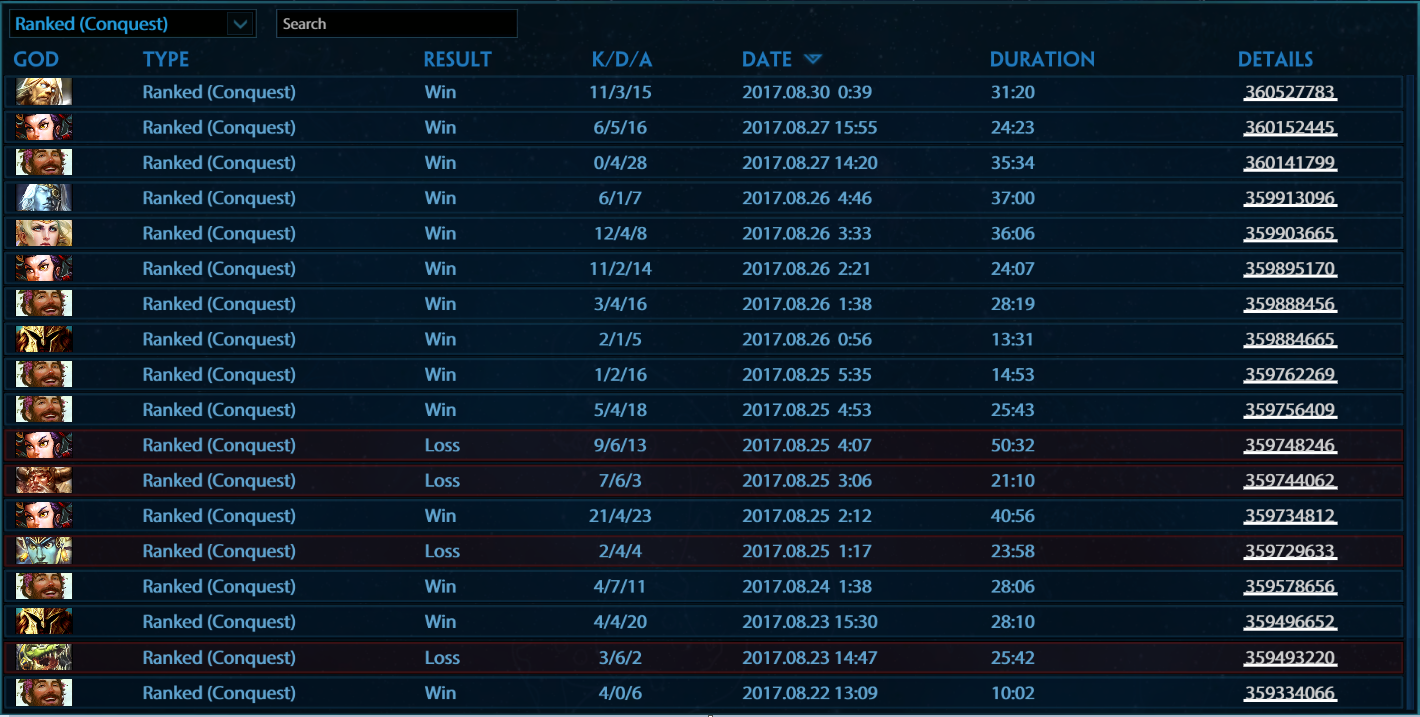 Had some ruff games in the start (can't be arsed to go over the wins).
In this

Terra either so the

Apollo got fed as well.

Rama game we lost first of all because I had to play ADC. As well as the enemy

Ravana just rolled over our jungle and the solo

Skadi was able to do whatever she wanted. Really disgusting that we lost because we where against a 4 physical comp (I even went