Vote received! Would you like to let the author know their guide helped you and leave them a message?

Start vs phys or not sure

When you sell boots/other options

1 X
Chang'e flings a crescent moon that hits all units in its arc, dealing damage to all enemies in its path.

2 A
Chang'e performs an evasive spin dance, unable to be hit for 1s. For each tick of damage from an ability that was avoided, Chang'e restores mana to herself and her allies.

4 Y
Chang'e's Waxing Moon dance is captivating, with this dance dealing damage and stunning enemy gods in front of her. Each subsequent god that is stunned is stunned for longer than the previous one.

All around overwhelming damage and poke

Her explosive damage and knockup can be hard to deal with

While your anti-heal helps her same style of button mashing as Arthur means you are not going to out-trade her at all, and as a guardian she is naturally a little tankier.

His 2 1 combo is deadly especially close to his tower

His 3 is deadly and the slows can be a big problem. Easily Chang'e's hardest counter

Welcome to my guide for Chang'e, Fairie of The Moon 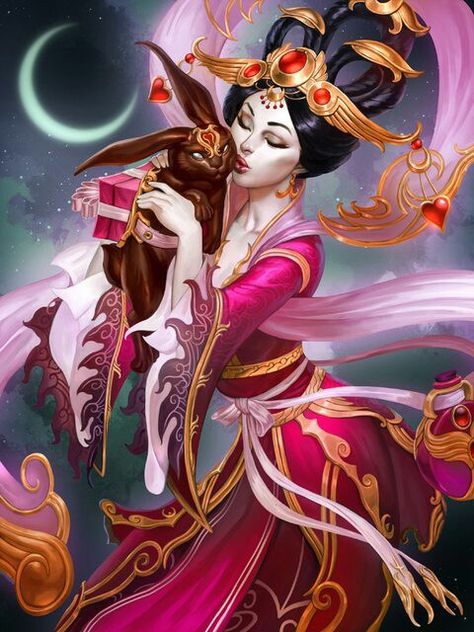 Chang'e's is a very unique god in smite in that she's a healer, who's an anti-healer, who plays like a warrior. In the solo lane

Meditation Cloak allow her to literally never have to back during the laning phase if you don't lose the lane too hard. Played correctly she is a huge asset to the team with heals and good teamfight damage while also being a distraction/tank

As I said before

Chang'e plays incredibly different than most other mages. While she is capable of blowing people up if she has a lot of damage, most good players agree she plays better dancing in and out of combat with high CDR and some tankiness.

Chang'e fights like a bi-polar spinning top. "Float like a butterfly; sting like a bee" is a valid quote here. You have to run in and use your 3 and 1 on the enemy at max range. And I mean max range like you should be missing sometimes. After you should run away and only use

Moonlit Waltz if you have to to avoid a lot of damage. Sit just out of their range until your 1 is back up and go back in and rinse and repeat. If they are within range of death using your whole combo, wait until your abilities are almost of cooldown to use

Waxing Moon. You should be able to get your 3 and 1 off before they can react. If you are in a 1v2 scenario don't panic and waste everything. You can often make some sick outplays since all of your damage is AOE. The big thing people forget is that

Jade Rabbit gives you a 25% movement speed buff just during your dances so use your 1 and 3 to dodge their skills while hitting them. If you have the ability hit both with your ult, remember the one in the back will have another second added to the stun. (And that adds up for the whole team!)

Heavenly Wings is a nice option for second active because it gives her even more chase and escape potential and even more mobility for her already crazy dodge potential. This outplay potential is what makes Chang'e so fun.

Early Game
At the very beginning of the game Chang'e should not win her match-up against most warriors unless they underestimate her and get greedy. Auto-attack as frequently as possible to make up for her lack-luster starting clear. Your strategy is to hit everything with both your one and 3. I usually walk up to the wave and auto creeps until I can hit everything with

Crescent Moon Dance, then either run out of archer aggro if I'm feeling pressured or just

Moonflower Dance and finish the clear. (Don't forget to get split the blue buff experience with your jungler. It's usually worth running from first wave uncleared. Your goal is to get totems, clear waves as quickly as possible while poking the enemy solo. Don't forget to keep buying items with

Jade Rabbit as you can afford them and when you can't pick up a ward or two. Wards are essential as Chang'e is very gankable early.


Mid Game
As you get into the teens in levels you have reached the mid-game. Hopefully you have kept even in levels with the other solo, or if they couldn't out-poke you you got a level advantage from not having to go back to base at all. By this point you should have either

Breastplate of Valor or

Void Stone and should be able to evenly fight the enemy solo. (Quick tip: If the enemy is a mage you can get Cooldown boots instead since you won't have breastplate until later) With your heal, unless you are losing hard, you should be able to out-trade the enemy solo. When there is no kill potential, start looking for opportunities to rotate to mid. The idea is to look at the map and if you see enemy mid or jungle by mid with <60% health when

Waxing Moon is up or close to it. You want to clear the wave quickly close to their tower and then move through their jungle to get to lane. If you get kills you should also be looking for opportunities to group up for gold fury or Pyromancer. Just make sure you don't miss too much farm.


Late Game
Late game your goal is to stick to your team and heal and poke as much as you can safely. Be careful on your own because Chang'e isn't very fast and even with your 25% boosts on all your dances, (which you should use to escape and chase,) you are killable by a gank. When you have

Gem of Isolation your escape and kill potential go up by a lot. Look for 2-3 man ults of course but don't be afraid to settle for one person if it means closing the gap with the stun or killing them before they can escape. You hopefully won't be getting 1-shot by diving assassins at this point but remember even with your 2 up you can be locked down and killed. In fights you should prioritize healing your squishies and dealing as much damage to everything. You aren't gonna be blowing people up but you can get secures with your short cooldowns or ult and if you have

Soul Reaver you can definitely chunk their tanks.

Chang'e is an agile bruiser mage who is easy to pick up, hard to master and is surprisingly deadly if played correctly. Her passive and heal give her great sustainability and farming potential and her kit has lot of outplay potential built in. Good luck out there with the Faire of The Moon

Thank you for checking out my guide! Hopefully it leads you to either learn Chang'e's finer points and strategies or else used the build and found a lot of success. If you have any suggestions feel free to leave a comment and ratings are appreciated. Dance away my dudes FootFetish (4) | June 14, 2019 7:10am
hi! so i play chang'e often, i'm no professional at her but i do like playing solo lane and i have been against her and been her a lot of times.
i do like your build 2, but the only correction i'd make is replacing spear of desolation for another defensive or offensive if you want.
see, in solo lane you don't have a lot of kill potential, its a lot about farming and boxing / poking your enemy. so spear of desolation gives you penetration that is good, and gives you some cdr that is always useful, but the passive ends being completely useless at the end of the day! so why don't replacing

Spear of Desolation for

Infinitebeast | June 4, 2019 4:15pm
In my experience the extra damage and mana/mp5 from mage's blessing has been more useful than the tankiness and miniheals from Warrior's Blessing. Have you found it being much better?
3

Warrior's Blessing instead. The reason as to why is because it rewards you for your poke (which is something you aim to do as

Chang'e) and it gives you surviveability, whereas

Mage's Blessing boosts your power and gives you some CDR/Mana, but with Multis, Chalice and Meditation, you don't really need the mana sustain from it (even because you have mana sustain from the warrior blessing). The extra power isn't as rewarding cuz you have your passive to just keep buying you more and more power. You should try it!
Load more comments (1 more replies) →
1

Warrior's Blessing with her. With Potions + Med + Blue buff, you really don't need the early MP5 that

Breastplate of Valor on

Chang'e, because I think it's a waste since you can go CDR on other items.

Divine Ruin, sell boots for another CDR item, like

Chronos' Pendant if I'm ahead.

Rod of Asclepius (no use building it if the enemy team has anti-heal tho),

Rod of Tahuti (IMO it's a better option than Asclepius on her).
1

Infinitebeast | June 5, 2019 2:23pm
I disagree with the no breastplate. (unless you're vs a magical or wayyy ahead) The protections, CDR, and Mana are exactly what you're looking for at that stage of the game. CDR is so important for her style of play when you're going bruiser.
1

Branmuffin17 (331) | June 5, 2019 2:37pm
I can agree with this sentiment. BoV should be a solid item for her and serves multiple purposes when she needs to go bruiser build in Solo.

In Solo then, if building BoV, you would probably NOT consider

Chronos' Pendant. You're already dedicating some of the build to protections, and you're turning her from a true damage god to a utility god late-game. So then Iso and Lotus are great items, Regrowth can be considered for the MS (and it has some CDR too), but you shouldn't need Chronos with the other CDR items available.
1

Lotus Crown, and I'd sell boots for

Celestial Legion Helm or pick up Lotus earlier. Then you can still pick up Chronos anytime and consider other CDR items as well, along with blue buff and Magical Might.
1

Branmuffin17 (331) | June 5, 2019 2:39pm
And yeah, this would be if you really wanted Chronos in the build. Agreed also with Vini, Magi should be the choice when going BoV early. And that's exactly what Infinite has in the build. Makes sense.
1

Shoes of the Magi for early pen if I built

Breastplate of Valor next.
2