Views: 127 Dovahsejer
+Rep | Report
I wanted someone to judge a rat build that I developed, I’ve used it many many times on junglers like Rat and Pele.

Vini, where have you been?

Views: 103 Vini_sds
+Rep | Report
(Here I am, answering questions that nobody asked)

Hello there! It's been a while, huh?!

So, I guess I owe some explanations, since I completely disappeared from the site AND the Discord server.

Short version: I stopped playing Smite because I wasn't having fun anymore, I was dating someone, and work/rpg sessions were draining my soul.

Long version:
- Smite: Ever since before the mid season patch, I wasn't having fun playing the game. This + the fact that tanks don't feel like tanks anymore and the solo meta and builds have drastically changed made me take a break from Smite. I was getting angry, frustrated and had zero fun playing anything, from Conquest to Arena.
I'm trying to get back into the swing of things, but it's not being easy. Feels like I never played this game.

- Dating: Yeah, I was dating someone, so my attention focused on this person and I had to let go some other things, and SmiteFire was one of them (Since I took a break from Smite, I also stopped contributing to…
Read More
Comments (4)

So I've been playing a lot of the "fun" modes to cooldown in between getting my butt kicked ranked but Assault feels like it's not fun at all. These modes used to be fun but people take them way too seriously now. The way the map is designed it absolutely encourages teams to camp under towers as there's no way around them. The first team to try to push out is usually the team that loses because they weren't playing lame. I honestly feel like the map desperately needs Gold/Oni Fury or Demon King PvE options to force teams to leave the safety of towers.

Furthermore if you get a Hunter you're immediately at a disadvantage due to the items. The game bans every single starter item for them. I get

Devourer's Gauntlet are powerful items but those are the core items for Hunters. Mages don't get anything banned for them except Warlock and Book of Thoth which aren't even used often in many mage builds. Mages can still go their full lifesteal route with rings, 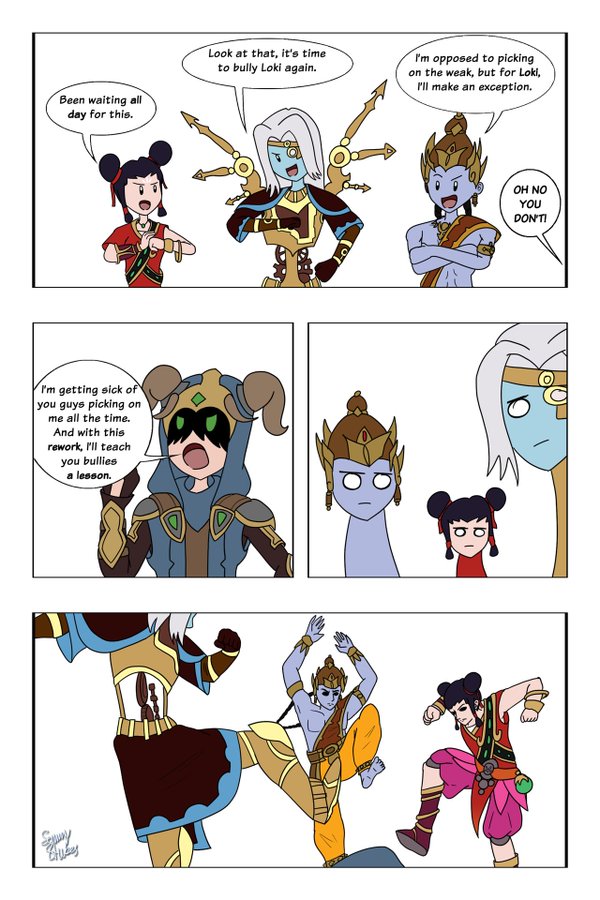 Some of you may have noticed the lack and infrequency of my comics as of late. As it stands right now, I'm going to be putting the Smite Shenanigan series on a bit of a hiatus. While I do love making these, other things in my life are kind of getting in the way as well as wanting to start a new project which I wanted to make for quite a long time. I will try to post a comic every time a new god is released or one gets reworked/reclassified. Until then, thank you for reading my comics and I hope I can make more when the cards are in my favor.
Read More
Comments (0)

What am I doing here?

Views: 224 Stuke99
+Rep | Report
So, guide number 30. This is a guide I wanted to make for a long time, outside of updating my Loki guide, so just like the last few teasers, I'll give a hint to who it will be via the song reference as the guide's title.
Here it is:

Views: 145 Al_Farther0091
+Rep | Report
Hi everyone If you view my builds/guides they are built to better suit my play style and certain game modes I play, which are mostly arena, assault, and joust I don't play conquest because it is too toxic for me I don't fancy ripping the joy out of this game by doing so

so whenever you see the builds I put out just remember they are for arena, assault, and joust (casual play) I have also added a not on all of my build guides saying the same thing
Read More
Comments (1)

So i just sent an email to hi-rez(included)

Views: 593 silentshell
+Rep | Report
I just figured i'd get anyone else's thoughts on this or even if maybe anyone else had any ideas they felt for different modes or otherwise. This blog post basically being an outlet for maybe thoughts on the game you really don't talk about and/or would like to see implemented. I don't really expect a response or for them to even really read this email but i sent it to the hi-rez staff and press emails listed on their site because i really didn't feel like trying to submit this as anything in the support or forum medium would get seen by anyone other than players. This is just basically thoughts and ideas i have about SMITE based on some of my experiences and my views on maybe some changes that could be helpful. This blog post is just an open invitation for any of you that may need/want to do so to have an opportunity to do so that maybe you wouldn't have initiated on your own.

To whom it may concern,

Views: 169 Big damage
+Rep | Report
Aside from the obvious being Auto attackers like all ADC's, plus certain auto attacking Assassins and Warriors, which ability based gods would you consider less CDR being necessary?
Read More
Comments (4)
1 2 3 4 5 6 7 8 92 176 >>