Core Notes Both warrior and ninja tabi are good. Decide if you want more dmg or more Atk Spd. Im starting to lean more towards Ninja Tabi myself.

Next Notes Choose between Runic and Ancile, and get Void Shield. If the enemy team lacks Magic Dmg build Void Shield first.

Get this Notes If you want/need more dmg here a now, change out mantle with ichaival.

Sell boots Notes Ichaival in most instances, toxic blade if you really need anti heal, shogun if team is heavy AP and you team is heavy AD/AA and support dosen't have it, Bloodforge if you need more raw damage and sustain.

Ichaival is the best choice tho imo.

Example Full Build(With elixir) Notes This is the build order i go for in probably 80%+ of my games as of now. The only real difference will be wether i buy

Relics Notes You won't need tele glyph on Heimdallr as his 3 works the same. So you are literally free to choose. But i usually build Beads and Blink.

That said, you can make som really interresting ganks if you run Teleport Glyph. Example you can go gank the duo lane from a recall and then use

The Bifrost to get back to the solo lane right away.

Next Notes Executioner and Asi will give you a great dmg boost and some sustain.

Sell boots Notes Ichaival in most instances, toxic blade if you really need anti heal, shogun if team is heavy AP and you team is heavy AD/AA and support dosen't have it, Mantle if you need more general beefiness.

Starter Notes The outline of this build is taken from Dmbrandon. He uses it in solo lane but i personally think it is better for the carry role.

Example Full Build - DMG (With boots) Notes This will make you melt the other team.

This is still very much a Work In Progress, any comments on the build would be appreciated. Also english is not my first language and im even **** at spelling in my own so there will probably be some typos here and there.

Also stop playing him as a carry. He sucks at that. Thanks.

Welcome to my guide for Heimdallr, The Vigilant

My name is Dreshii. I am a long time Smite player who started back in closed beta, and have played the game on and off since then. I primarily play Solo and Jungle.

This is my second guide ever written on Smitefire. Which i decided to do because i think the builds on the site as of now (12-12-2019) are misinformed about where and how to play/build our boy Heimdallr.

Regardless, lets move on to the tootin boy, Heimdallr 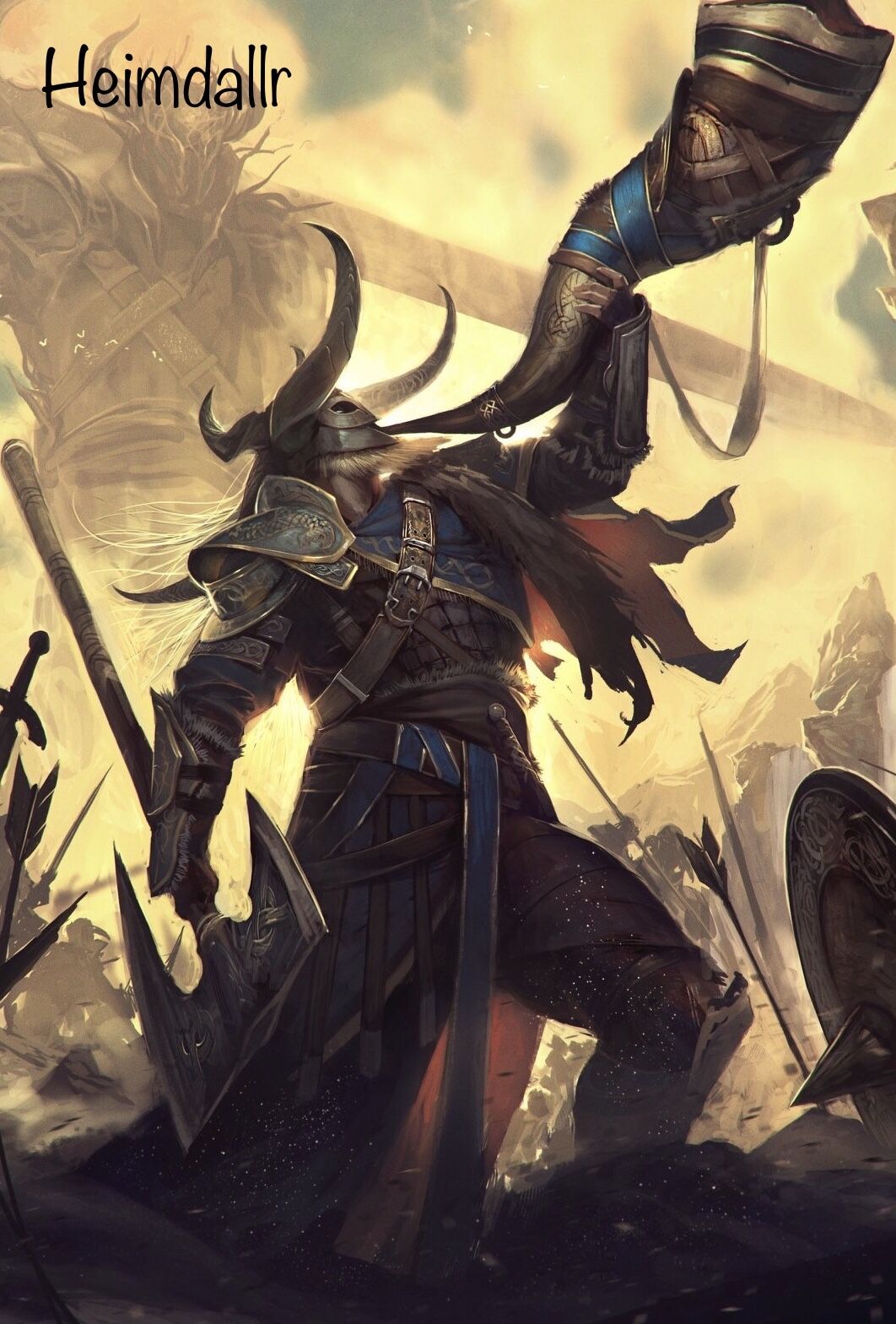 (I did not make this art, couldn't find any credit. If you know who made it please inform me)

Altough he is a hunter, i don't think that Heimdallr belongs in the Duo lane playing like a typical hunter. His kit is very in your face with both his 2 and 4 putting you right into the opponents faces. That is why i believe Heimdallr exceeds in the Solo lane and Jungle as a ranged Warrior. So let's look at some Pro's and Con's.

THIS SECTION IS A WIP

Heimdallr's main waveclear, burst and poke damage. He will throw his sword up into the air where it will act as a ward revealing nearby enemies. You can then reactivate the ability and send the sword flying down and dealing dmg in an area. The sword does have travel time depending on the distance so try not to run to far away from it. This skill will throughout the whole game deal a great amount of dmg, both because of the high base stats but also because of the 95% Physical Power scaling. Always try to send the sword into the air before a fight so you can smash it into the ground fast. It works great after the knockup from

The Gjallarhorn and when an enemy comes back from

The Gjallarhorn is one of the most pivotal part of

Heimdallr's kit and plays an important role in both kill potential and survivability.

Heimdallr wil take out his horn and start blowing it slowing the movement and attack speed of enemies in a cone while damaging them. At the end of the cast or upon reactivating

Heimdallr will do a powerfull blow that knockups and damages enemies in a circle around him. One of the key parts of this ability is that while

Heimdallr is blowing his horn he is immune to knockups of any kind and gains protections. So one of the keys to playing

Heimdallr efficiently is knowing when to use

Sickening Strike is an interesting ability. It deals damage in a semicircle, heals you and reduces enemy healing by 50%. Because of its decent damage and healing, I recommend leveling up

Tail Whip since their damage difference is not very large and

Sickening Strike gives you increased healing. I generally find that

Sickening Strike is your best poking tool with its damage and healing reduction (since most adcs get their health back via lifesteal), but since you're usually so mana hungry during your early game, I would recommend only doing this if you need healing as well. Always make sure to hit at least 3 targets, otherwise you will not receive full healing. Additionally, this ability is the final part of your core combo (

4 - Lurking In the Waters

Lurking In The Waters is the figurative icing on

Sobek's cake. It's an incredibly ult that slows any enemies within its radius, makes you CC immune, restores your mana and deals a great amount of damage. It's generally best used to trap enemies out of position after using

Charge Prey, but it can really be used at any time you want to hinder enemies' retreat or help your team in a teamfight. With maximum CDR, it also has a pretty short cooldown and can be used in a pinch to restore your mana and/or clear a minion wave. One important thing to note is that this ultimate is also your only form of CC immunity unless you buy

Purification Beads or magi's blessing, making it useful for escaping ultimates like

Ares' and enemy slows if needed.

Dreshii | January 3, 2020 6:58am
The first example build is simply a raw damage build. Bloodforge is bought instead of Blessing late, and brawlers is a generally good item. good dmg, good pen and today everyone has some kind of heal or sustain so the passive is just generally good.
1
[-]

Bloodforge listed first is how a lot of people picture their builds, as seen in-game. Note that Dreshii identifies

Hunter's Blessing as being purchased as a starter, so BF is just replacing it in the full/complete build.

And to that end, that's a functional build overall. Dreshii, you might also consider

Soul Eater as a last item instead of BF. That gets you a full 40% CDR, and with the hybrid commitment, you get more out of the lifesteal component of the item. However,

In an Arena game, in that situation where you're committing heavily to ability damage, you might also consider just dropping the blessing altogether...yes, it's pretty cheap, and yes, it does provide some AS, but rushing Tabi might be more helpful. Something to consider at least.

As for the "warrior" arena build, I get the use of

Runic Shield, but don't really like it, especially late-game like that. It's best as an early-game item, IMO. I also don't know that I like Trans in the bruiser build. I know it gets you a lot of damage potential due to the power, and the CDR is nice, but if you're committing to being a bit tankier, you might shift some things (and you don't really need that much mana).

Void Shield's range is his basic attack range, but you won't get the benefit from more distant hits of his 1, for example.

So, in place of Trans and Runic, you might consider Blackthorn and Ancile. Blackthorn's health makes up for the switch from Runic to Ancile, you get a bit more CDR in that combo. You can keep Void if you want, or then switch to different pen as preferred.
Load more comments (2 more replies) →
1
[-]

I'd say though that not including god deaths, if you're around 3 minutes/6 waves of minions, you'll get full stacks from that. Add god deaths, and you probably stack it in 1.5-2 minutes?
1
[-]

Dreshii | January 3, 2020 12:50pm
Thanks for the input i will definitely look into it. Have been away for 2 weeks and even before that i haven't played Heimdallr that much in Arena and the build in a whole is still up for changes. But 100% thanks for the input.
1
[-]

Gulfwulf (75) | December 22, 2019 10:25pm
I'd still recommend tier 2 boots and maybe mace, or whatever it's called, in Arena because that extra movement speed means you should be able to clear you buffs and get to the 1st wave before it reaches your portal. That and you really don't want to be slower than the enemy team if you can avoid it; plus ninja's extra attack speed does come in handy.
1
[-]

Attacker's Blessing as hunters blessing stacks to slow for arena
1
[-]

Dreshii | December 12, 2019 4:56am
Yeah i put that on by mistake. It should have been removed tho.
Loading Comments...
Load More Comments