Greetings, everyone, I have a different guide for you this time. Since I've made a guide for every warrior in the game as of writing this, I felt it's time to branch out and make guides for other gods I haven't touched on yet, so here we are. This will be my first Hunter guide and the one I picked was a god that instantly caught my interest as I have Slavic roots (Slovakian) and felt a more personal connection to this God. Let me introduce the Master of Evil, the Lord of Darkness, the Figure in Black, Chernobog.
Note: you don't have to follow this guide to the smallest detail, these are suggestions on how to play Chernobog. I encourage you to look at the comment section below and see other suggestions. 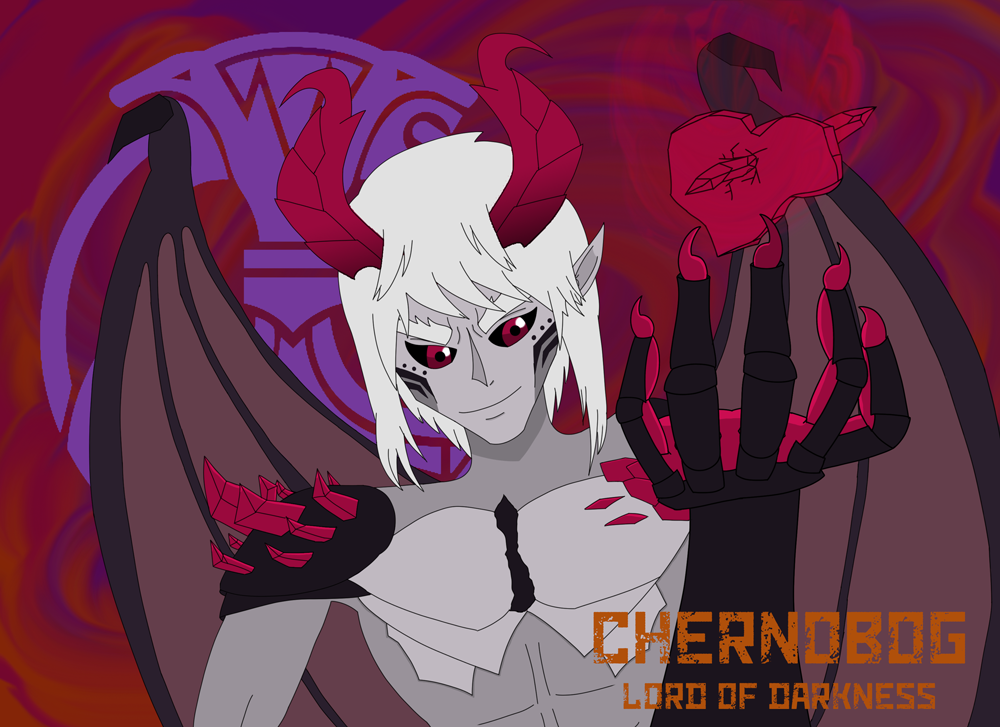 Chernobog is a Physical, Ranged, Hunter who utilizes his kit to chase and lock down his target before pummeling them with speedy and accurate auto attacks. As Chernobog, your role in the team can duel act between a standard Carry and an Anti-Roamer god with his ultimate and his dash for some tricky maneuvering.

It's a rather simple passive but the more important part of Chernobog's kit. Each basic attack you land on a target gives them a stack after the third stack is applied the target is dealt extra damage in an area around them as the stacks reset. This is why being able to land your basic attacks on Chernobog is important, your goal is to apply constant pressure to the enemy and you can't do that if you can't hit your target.

With a very short build-up Chernobog throws down a large crystal that deals damage upon landing, but that's not all. Once landed, the crystal starts counting down in which the crystal explodes dealing additional damage and rooting any target caught in the radius of the explosion. Alternatively, you can hit the crystal with your second ability for instant detonation.

This little ability has a triple role. A line projectile that goes through all targets that functions as a basic attack so effects activating from basics like lifesteal and critical chance apply. There's more, once fired, Chernobog also gains an attack speed steroid for a short duration as well. As mentioned in Crystallized Curses, you can detonate your crystal early by hitting it with this ability. Depending on the situation, it would be best to let the crystal time out naturally and save it for when you need it for boxing.

A rather slow dash but what it can do it makes it different and can act as an offensive tool than strictly defensive. If you hit an enemy god with this, it applies a slow. If Chernobog hits a wall with this ability, then he enters it and becomes completely immune to all forms of damage, CC, and untargetable while he stays inside the wall. You can fire this ability again to dash out from the wall. A nice trick with this is to get your opponent between you and a wall, dash through them into the wall and dash back out for a fair amount of damage. The slow from this ability can also be used to better line your lockdown combo.

When many first saw this ability they were confused as this ultimate would fit a guardian or a warrior more than a hunter but I would argue this fits thematically and gives Chernobog that secondary role as an Anti-Roamer.
Chernobog flies into the air after a quick channeling period and sends out a shadow clone of himself to every enemy god currently on the map. When he picks a clone to fly to, he speeds towards the targeted location giving himself cooldown reset on all his abilities, minus the ult, as well as temporary damage mitigation and movement speed. You can use this to track down a fleeing target but this ultimate can also be used to prevent the enemy from pushing the lane or completing an objective as the damage mitigation and movement speed compliment this alternative usage as well. Alternatively, you can use this to get away by picking a target in one of the other lanes and dashing back under a friendly tower or safe spot to recall.

If it wasn't obvious at this point, Chernobog benefits greatly and revolves around his basic attacks as the main source of his damage. Having items that provide a lot of attack speed as well as some additional stuff like lifesteal or critical chance will greatly increase his damage output when having to go against other gods in the game. With some additional items to help with his abilities, then Chernobog could give his enemies a hard time.
Here is a selection of items that can synergize with Chernobog that could be a nice addition to your build.

While I do mention that Chernobog has better auto-attack damage than ability, this item shouldn't be passed up regardless. Chernobog's abilities provide tons of utility and the best way to confirm a kill but the downside is that he burns through his mana quickly. Getting this item and going with the Trans. variant build will take advantage of this item but also fix your mana problems.

Chernobog gets a crazy amount of attack speed, to the point that he might overcap on it, so let's use that to our advantage. Attack speed and hard-hitting damage are Chernobog's friends, so getting more attack speed to boost his damage sounds like a no-brainer for our prince of darkness.

This item is very rewarding for Chernobog aiming and landing his basic attacks. When your basic attack triggers a critical hit gives Chernobog increased movement and attack speed. Perfect for Chernobog as more speed makes him a more dangerous threat.

This is going to be your most used combo as it will provide all the clear and team fight control Chernobog needs.

Utalizing the slow from your dash, you'll be able to land more hits on your target. Try to get the double tap by dashing into and out of a wall that the enemy gets close to.

While to use of your ult and dash are situational, you always want to use your Crystalized Curse first before you follow it up with Vicious Barrage as that's Chernobog's main combo all the time.

Early Game
Chernobog can't do much this game and more than likely get bullied by the enemy team for how much he can lack this early in the game. Turtle under tower or if paired with equally aggressive support then you can try your hand at going from hunted to hunter.

Middle Game
Once you get your ultimate online is when you can start to push back against the enemy if you haven't done so already. Make use of the ultimate to quickly get back to lane to prevent the enemy from pushing any further or to keep them from leaving if you think you can handle them.

In conclusion, Chernobog is a hunter that can give the enemy team hell for his elusive wall hiding ability, lock them down, and punish them with fast basic attacks. Taking flight and hunting down the enemy or cut them off from doing something they shouldn't, Chernobog has a consistent presence and fighting him head-on can be a life-threatening situation if he gets the upper hand. Remember to always line up your attacks, use your ult to attack as well as defend, and make their game a living nightmare.

noahcash | May 9, 2020 3:12pm
This was a great introduction to Chernobog. I believe he excels as a mid-laner as well, that's where I have found the most success. Nonetheless, hats off for this guide.
1
[-]

Warrior Tabi for the crit build.

Also for the trans build I would swap

The Crusher the item that would be replaced if you need anti-heal.

Asi as another boots replacement option.

Last thing, add an extra multi pot to each build's start. There is 50 gold leftover for another pot.
2
[-]

Kriega1 (107) | July 8, 2019 6:58am
Your trans build needs executioner. Swap bloodforge for it, in which case I recommend swapping ninja tabi for warrior tabi (but ninja is fine, it's just if you sell boots late for a non-attack speed item it might feel a bit odd).

The Wind Demon build could work but you would be better off with Rage instead of WD for the higher crit chance. e.g. Devo's, ninja, rage, exe, deathbringer, titan's/bloodforge. Sell boots for asi or alternative.
1
[-]

Devourer's Gauntlet in the same build because double stacking isn't usually a good idea. Personally I'd go with trans + asi and I think that should be an example build.
1
[-]

kapciowy | April 27, 2019 1:57pm
U know maybe first skill is better for start than second like artemis third and second quite similar you think?
1
[-]

Stuke99 (51) | April 27, 2019 2:17pm
I prefer the second ability over the first mainly for the benefits of attack speed and being able to proc basic attacks than the easy to dodge damage and root from the former.
1
[-]

ThePerfectPrism (53) | April 27, 2019 1:53pm
Stuke, yet again comes out with another guide that gives you a really nice idea of the mindset you should have with a character, paired up with an equally good build. Not only it's easy to read but it also doesn't open too much space for rants and ramblings some more informative guide makers might have (This is why I also try to keep it simple lol).

Just a few things I want to point out :

1. It would be interesting for you to recommend one of your alternative / additional items as a preferred 7th item. Maybe through notes?

2. I do believe this guide would benefit a lot from a bigger combo variance. What combos should I aim to do if I'm retreating? Do I just try to Double Dash or should I use my other abilities to try to poke or maybe zone out the enemy? Things like that.
And I also think you could do a thematically straight-to-the-point matchups. What sort of mentality should a

Chernobog player have when they go up againts an

Neith? It doesn't need to be a compendium, but some healthy reminders and maybe even some insight from your own experience would help this alot.