That said, given a base damage number, a crit with Heim is going to deal more damage than a crit with any other hunter.

Heim's attacks 1 and 2 have a 1.3x damage multiplier. Attack 3 has a 1.5x damage multiplier. I've put this into a spreadsheet so you can see the calcs. It should be pretty straightforward and easy to understand, but if you don't, I can attempt to explain further.

Basically, take the base damage, multiply by the basic attack multiplier (1.3 or 1.5 for Heim, no actual multiplier so "1" for any other hunter outside of Iza, then multiply by the crit...with or without DB, to get the total damage. 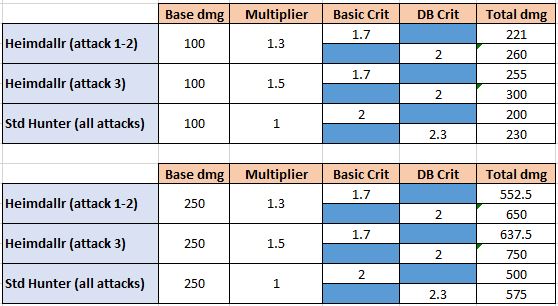 Ravenwolf | December 11, 2019 2:49pm
Just because any hunter can run Crit doesn’t mean they Should. Besides these aren’t even very good Crit build suggestions.
1
[-]

All 3 builds are not optimal.
As such, can't really suggest/support any of these builds as they currently stand.
Loading Comments...
Load More Comments