Restored Artifact is my suggestion for

Chronos' Pendant will come in handy afterwards, not to mention that it's an amazing item.
I also suggest going with a

Multi Potion instead of a

Healing Potion since you can already sustain pretty easily using

Book of Thoth with

Persephone.
The problem, however, occurs when facing certain comps, like a Sustaining Comp, or a Bruiser Comp. On these cases, you have to make certain changes, like adding

Avoid These Items At All Costs! Notes Allow me to explain:

Staff of Myrddin is a great item that allows you to use an ability twice after ulting. Great for most Mages (if not all). However, with Perseohone, this ideal item isn't as great:

To put it simple,

Grasp of Death is almost all the time followed by

Bone Rush if the enemy is at a distance. In this scenario,

Bone Rush would be cast twice, so at least here,

BUT what happens if you use

Grasp of Death at short range?
If you know what you are doing, then you should proceed with a few casts of

Flourish for a devastating combo. Now picture that scenario for a bit: If you ult and then use

Staff of Myrddin will proc on you first use, but

Harvest is an ability that you can use up to 6 times without triggering it's cooldown, so you would be wasting an item's passive almost every time. Now you can understand why this item isn't really a good one, at least not on

Polynomicon is also not a good item. Persephone relies heavily on her basic attacks to activate

Harvest, so unless you time really well where you are goint to use your basic attacks without triggering your plants (and losing

Polynomicon's effect), then you shouldn't even think of buying this item.

Hello guys, and welcome to my

Persephone Guide. On this guide, I'm going to talk about her abilities, interactions, match-ups and a few things you might not know about her.

Persephone is, in my opinion, insanely good. I'd even dare to say that she is the best mage in the game right now (again, just my opinion), but she also requires skill to be used efficiently, so this guide is here to help anyone interested in trying her (if you haven't already). 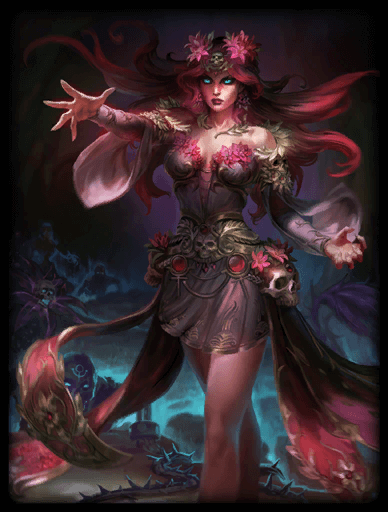 Persephone, most people prefer to level

Harvest first for both wave clear and poke. What people don't realize, however, is the fact that you can do that very same thing by leveling

Bone Rush first allows you to hit all the wave, and thanks to its great base damage, you can clear minions relatively easy.

You should do the following to clear and poke effectively at level 1:

Well guys, this is it for my

Persephone guide. I hope you liked it and I'd appreciate any feedback. Also, please keep in mind that this is my second guide here so I hope it isn't annoying or disappointing (lol).
Thanks for reading, regardless.

Perfxction (1) | March 3, 2020 12:11am
i would say for your build against tanky comps drop obshard for staff of myrrdin because obshard passive is very unreliable and you overcap %pen in that build. in that case you can also replace desolation with divine which will almost every game be a very valuable item.
i know what your problem with myrddin is but in my opinion even if you dont make any use out of the passive its still better than obshard because you get 120power and can get divine and still have max cdr.
the main reason why obshard is just a really bad item in my opinion espacially for persephone is you want to poke with a lot of hits on her multiple 2 and stuff you will only get the passive for very little of your damage in a fight it can also be wasted on minions and capms so in general i just dont think the passive does a lot espacially on a god that does its damage in multiple hits like multiple explosions.
1
[-]

nchardak | February 17, 2020 2:51am
Your 'avoid items' I agree with poly but Staff of Myrddin?? really? the 10% pen and CDR can replace CDR boots for your last item. Plus if you ult someone, you can double cast your 1 for free on them! Staff of Myrddin is kinda fun on Persephone! I get its personal preference but try it, you might like it.
1
[-]