Ethereal Staff after getting

Reinforced Shoes if you need more defense or

Shoes of Focus with

Ethereal Staff after getting

Reinforced Shoes if you need more defense or

Welcome, one and all, to another guide. I'll be your narrator, Stuke. In this guide, we will be taking a look at an eldritch horror, crafted by the twisted mind of one H.P. Lovecraft, that became such a large presence in pop culture that his influence gave him a spot on the roster on the Battleground of the Gods. Ph'nglui mglw'nafh Cthulhu R'lyeh wgah'nagl fhtagn.
Note: you don't have to follow this guide to the smallest detail, these are suggestions on how to play Cthulhu. I encourage you to look at the comment section below and see other suggestions. 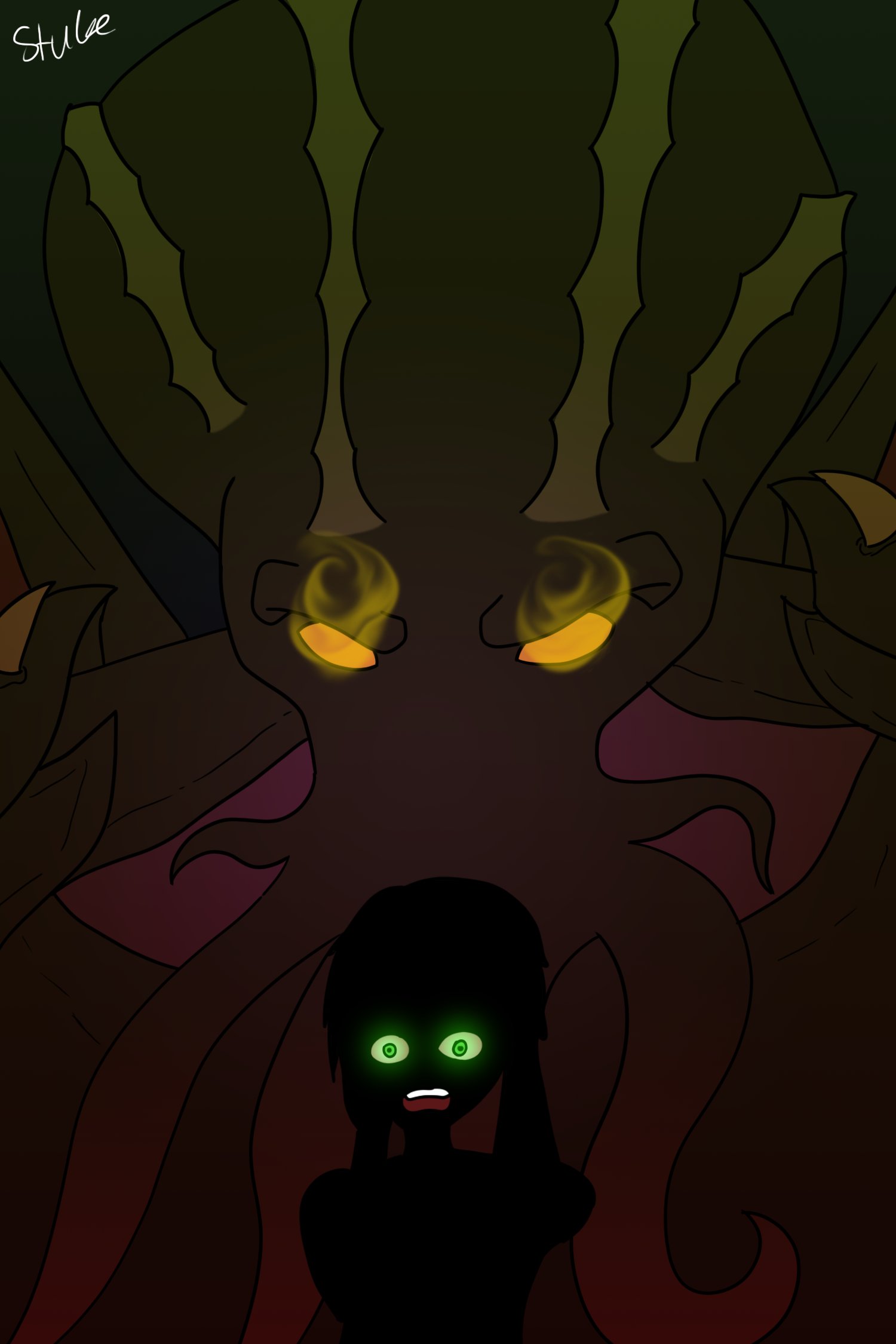 Cthulhu is a Magical, Melee, Guardian who uses his constant damage output to drive his targets mad and then using the madness to make himself an even bigger threat to the enemy team. Correct applications of Torment and Insanity can make Cthuhlu tankier as well as giving him even more power for each of his targets that he has driven into madness.

When Cthulhu deals enough damage to a single target, through abilities or basic attacks, that target is given a stack of Torment. Once reaching the max amount the enemy goes into Insanity, causing visual and auditory hallucinations, as well as gain magical power for each enemy god that enters the insanity state. That's not all when this gets combined with his first ability, this passive starts to become more interesting.

Firing a small cone in from of you, any enemy caught in the cone are dealt damage and as given an attack speed slow. If Cthulhu successfully hits an enemy god, he also receives damage mitigation for a short duration. As mentioned in Prey on Fear, this ability gets a fun benefit when utilized properly. If you use this ability on an enemy while affected by Insanity, they become feared for a short duration as Cthulhu gains an additional percentage of damage mitigation until hitting the max amount. Making Cthulhu permanently tankier each time he consumes Insanity. This will be your main fighting tool as the benefits from being able to mitigate oncoming damage and slow enemy attacks are good on their own but being able to fear any enemy that is affected by Insanity makes this a devastating core to Cthulhu's kit.

Cthulhu channels a portal to create an eldritch mire, the longer he channels the larger the mire becomes, and during channeling the portal drops two masses that damages and provides effects. On the first hit, any enemy god is slowed and on the second hit, all enemies are rooted with each hit applying a stack of Torment. Since this is a channeling ability, Cthulhu is left vulnerable while this ability goes through its cycle but can be stopped early by canceling it or if an enemy god hits you with a hard CC.

While slow, it is powerful. Cthulhu dashes forward while trailing two projectiles behind him. Enemy gods hit by Cthulhu or the projectiles are given a stack of Torment. If Cthulhu dashes directly into an enemy god, that enemy is knocked to either side of Cthulhu but in the way of his projectiles. Best used as an engagement or an escape depending on where you stand during any stage in the fight.

After dealing damage to any enemy around you, Cthulhu changes into his true form. In this state, Cthulhu gains increased health, and any enemy god that stands close to him starts to gain stacks of Torment with the number of stacks speeding up if they are facing him with enemies affected by Insanity dealing less damage to Cthulhu as a result. While in his true form, Cthulhu gains a new set of abilities. All of this lasting for the duration of this ultimate.

Cthulhu swipes at the ground and leaves a trail of energy that deals damage to any enemy caught in the slash trails. Since this counts as an ability, you have to wait to use this again but it doesn't use any mana so you can spam this without worry.
Note: This doesn't proc item effects despite it's treated as an ability.

Cthulhu throws down a projectile in a target location that explodes, deals damage in an area, and knocks-up any enemy caught in the blast radius. Use this to set-up with the team or to get one last hit in if they are out of Sever's range.

In a very large radius around you, and after a short wind-up, Cthulhu takes a chunk of his health to heals all ally gods that surround him and damages all enemies in the radius. If Cthulhu is below a certain threshold of health, enemies will not be damaged and the heal to allies is cut in half.
Note: Cthulhu cannot heal from this ability so stay aware that you have no way to sustain during a fight.

Cthulhu is a very big boy. Utilizing his size to act as a meatshield, combined with his aggressive control and damage mitigation, makes him a serious frontline threat. Building items that make you tankier, bring your abilities up more often, as well as punish opponents caught in your abilities will benefit Cthulhu and his aggressive tank playstyle. Here is a selection of items that can synergize with Cthulhu that could be a nice addition to your build.

Since all of his abilities offer at least one form of crowd control, having this item in your build can seriously benefit Cthulhu deal more damage than the enemy will expect him to.

Since Cthulhu likes to get in the face of his opponents, or if the enemy gets close to take you out. It would be nice to mitigate any damage that comes your way. Combine this with Cthulhu's built-in mitigation as well as increasing it via passive Cthulhu can absorb more damage than most gods could probably dish out.

Rush in and put the center of The Mire on top of the enemy and they will be rooted for a follow-up from your basics, Sanity Break, or even teammate. Or you can switch these abilities if you want to hold them down before dashing towards them.

Similar to the last one but instead of holding them down, you hit them with an attack slow and gain damage mitigation so you can proceed to punish any opponent that doesn't get away fast enough. It's best to use this combo when the enemy is about to enter Insanity.

Combining the two previous combos to deal the max amount of damage as well as constant application of Torment stacks for when byou're ready to use Sanity Break to consume the stacks.

Use the standard engagement combo and once ontop of the enemy team, pop your ultimate and start to unleash hell on those who either try to fight or get away. Keep spaming ability until your ult runs out. Once it dose you can either use Sanity Break on any enemy close to you who entered Insanity or use Rushing Terror to get away or group up with your allies.

STAGES OF THE GAME

Early Game
Cthulhu's early game is a tad bit tricky but can be pulled off, if the enemy is aggressive, stay under tower until you're able to make a move or keep them back by being equally aggressive. Try to spam abilities and keep adding stacks to your passive so you can be tankier later on in the game.
Middle Game
While not necessarily bad, more like Cthulhu plateau during this stage, in the meantime just keep stacking your passive and try to out farm the enemy and you should be good for the late game.

Late Game
Now we start having some fun. Now that you're extremely tanky and got some decent power under your belt for team fights, you are free to engage the enemy team and start causing chaos as the meatshield and CC machine for the team.

In conclusion, Cthulhu is a horrifying creature from the depths of Lovecraft's twisted imagination but in-game he's a beefy tank with constant damage and high area of control that progressively gets harder and harder to take down without the longer the games go on and Cthulhu is allowed to snowball. Just remember that your size is your biggest tool, apply stacks of Torment whenever possible to ensure you become stronger, ng ymg' mgah'ehye mghrii suffer fhtagnshoggg hup shogg!

Hide of the Urchin bought a bit late? I thought the latest you should get it is 4th.
1
[-]

Hide of the Urchin 4th and can't because I need another item, either 6th or to replace boots I'll get

Gauntlet of Thebes. Get the stacks on thebes way quicker and easier in the late game than urchin.

Gauntlet of Thebes, which is easy-ish to stack when your team contests near Fire Giant lategame and you can be in assist range for waveclearing.
1
[-]

Pestilence is a standard item pick up in the suggested build? I know there is 'healer meta' but I don't think an aura on the solo is worth it every game.
1
[-]

Divine Ruin or in other cases

Freya backline or something similar.
1
[-]

IllmaticXVII | July 1, 2020 3:52am
If You are going Cthulhu solo, most times you won't need a anti heal items as the support should buy Pestilence and the Middle lane should get divine unless you lane specifically against a healer and even then I prefer pestilence. Cthulhu's Damage output is already insane and the only items you really need for damage are void stone and ethereal staff.
1
[-]