Starter Notes If you forgo

Combat Boots if you want to be more aggressive.

Talaria Boots if you want more mobility or

Warrior Tabi if you want to play more aggressively.

Greetings, one and all, Stuke back with another guide. It's about time Hi-Rez final got around to this god, this was a long time coming. In this guide, I will be showcasing the God of the Sky, the Predecessor to Ra, the son of Osiris and Isis, and the Avenger. Ladies and gentlemen, Horus.
Note: you don't have to follow this guide to the smallest detail, these are suggestions on how to play Horus. I encourage you to look at the comment section below and see other suggestions. 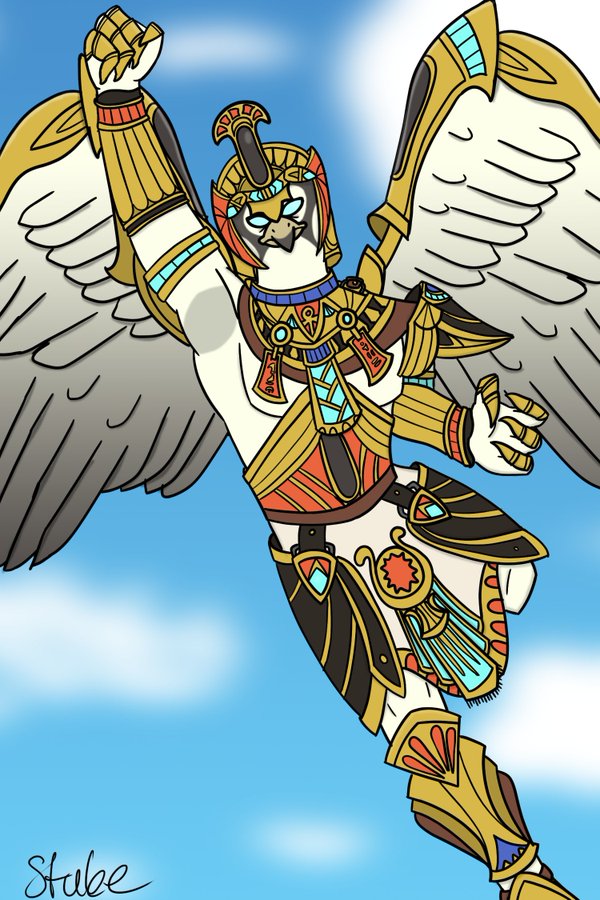 Horus is a Physical, Melee, Warrior who specializes in getting to the front lines and providing support through crowd control, protection buffs, and healing. Playing a more supportive playstyle when compared to the other Warriors who can fill that role, Horus makes use of his ability to position himself, his teammates, or the enemies in team fights to secure his victory.

Every time an enemy god attacks Horus, he gains physical and magical protection as well as crowd control reduction per stack up to 10 stacks. If Horus is no longer being attacked, a timer will begin and will give Horus a small amount of health when the duration is up. While it seems like a very good passive to be aggressive, and it is, the protections, CCR, and the healing isn't much so do not expect that to keep you going throughout a fight as it takes a while for the heal to activate.

This duel-part ability will be your main clear tool and one of two forms of crowd control in your kit. In a small circle around Horus, he summons a gust of wind that knocks up all enemies caught in the radius. That's not all, after the knock-up, Horus has the option to fire a second gust of wind that acts as a projectile that passes through all targets. Use this ability to either help clear the lane or to set up the enemy for your teammates to better confirm damage on them.

The second crowd control ability. After a short build-up, Horus dashes forward and passes through all enemies in his way dealing with damage. If Horus were to collide with an enemy god, the target is stunned. After contacting his target, Horus brings out his glaive and cleaves in a 180p degree cone in front of him shredding protections to all enemies caught in the cleave. Use this as your main initiation tool as the stun and protection shredding will help set you up for hitting them with Updraft or a follow up from an ally. Since this is a dash, it can be used to get away, but you would get more out of this if you use it to engage instead of retreating.

The saving grace ability, Horus selects a friendly, god or minion, and fly towards them. When he reaches his destination, Horus releases a heal and protection buff to all friendlies in an AoE around him. Use this ability to heal a friendly or to give them a boost in their protections to keep pressing the enemy in engagements. Or if you find yourself in danger, you can use this to fly to a safer location or to get the heal off for extra sustain when fighting. If you're pushing the lane, you can use this on minions to better assist with keeping them alive when moving down the lane.

Sending a projection of yourself into the sky, Horus flies over the map and is given a targeter. After picking a spot, Horus begins to channel for a short duration and teleports to that location and knocks-up all enemies caught within the radius of the summoning point. What makes this ability better is that before you teleport, Horus has an AoE circle around his original body that any friendly god, pet, or minion can walk into and if they remain in the circle when he teleports, they go along for a ride. A perfect tool for getting the drop on an enemy if they are crowded around an objective in which Horus can drop his whole team on top of them and create chaos with a sudden team fight. This can also be used as a great scouting ability as the enemy team cannot see Horus' projection so it can make for some sneaky vision. It should be noted that the enemy can see where Horus and whoever is in the circle are about to land but that's at the last second of the channeling so they will have enough time to act but not enough for a complete counterattack.

As stated in the introduction, Horus plays better as a support tank than as a bruiser, like most Warriors, but that doesn't mean he can't be a bruiser. If you're playing a standard warrior, then focusing on protection, damage, and cooldown reduction is the way to go. If you're in the support role, the setup is the same but instead of focusing on damage, having a larger health pool instead of damage will benefit Horus much more.
Here is a selection of items that can synergize with Horus that could be a nice addition to your build.

Having the number of crowd controls comparable to that of a Guardian, this item works wonders for Horus. A warrior with tons of CC is scary, so let's make use of that CC by giving his attacks a bit more bang that before.

This might seem an odd choice but hear me out. Horus has a bad basic attack chain, and once his main clear goes on cooldown he has to resort to basic attacks. To make up for his lackluster clear, grab this to not only keep up the pressure against an enemy laner but the nice movement speed increase is just the cherry on top.

An item custom made for Horus, or any other physical god with a heal, and is amazing with it. Being able to give a boost your healing is especially helpful for any healer and this item is no expectation. Not to mention the protection, power, and health you get from this item makes it a perfect item for warriors.

Your standard engagement combo, rush at the enemy, shred their protection with a stun, and hit them with a knock-up. If in the support role, wait for your ADC to get into position before engaging.

If the enemy is collapsing on an ally, use this combo to help keep them alive while peeling the enemy away from your teammates.

Horus' main engagement combo is Fracture into Updraft, but you can include To The Skies! to get the drop on the enemy if they are doing an objective as well as the inclusion of Protector's Surge to position yourself away from the enemy or to give an ally or yourself a bit of a pick-me-up.

Early Game
While not necessarily bad, Horus struggles as he relies heavily on having all his abilities online to perform effectively. Play defensively until you have the means to start pushing back.

Middle Game
This is where Horus starts to take off. Having a good number of points in his abilities, he can take the hit and send them back. After finishing up the tier 1 tower, start to rotate around and help the other lanes if they are struggling.

Late Game
Get in the enemies' face, smack them around with CC and protection shreds, then provide heals and buffs to your allies. Keeping your team alive while being a threat to the enemy will be your top priority throughout the rest of the game.

In conclusion, Horus is a high mobility support warrior who can get ion the face of his opponents and wrangle them up for his teammates to follow up or deal with them by himself if possible. Always remember to utilize your mobility to deal with the enemy or support an ally, get the drop on the enemy with your team, and claim your place on the throne.

Pridwen Doesn'nt even work in combination with his shield from ultimate. In fact, the two shields cancel eachother out. So do not use

Also your support build has no mention of

Kriega1 (109) | June 22, 2019 4:33am
For your solo build I would swap breastplate with blackthorn and get void shield after it instead because you're overcapping CDR until lategame in your build. Also talaria boots is fine and all for solo but if you're getting teleport I don't see the importance of it. The passive gets wasted a bit and with teleport you shouldn't have problems rotating to other lanes. If you're into a high pressure/poke matchup you could consider

Branmuffin17 (314) | May 21, 2019 1:30pm
Looks good overall. Standard support type build with the late Mantle to help protect Horus for an extra second if he's ulting away or whatever. If anything, an option for

Question on the Support though...why do you put a 2nd point into

Fracture at level 3 before getting

Protector's Surge at 4? You also have 6 points in

Fracture and 4 in Surge...so I'm going to assume you screwed up and Surge should also be at 3.

Blackthorn Hammer might be in there a bit late? Might suggest it earlier when you do pick it up. Also,

Oni Hunter's Garb should be an option here too.

Berserker's Shield really a good option for him? And

You should probably have two stages of the game sections...one for support, and one for solo.
1
[-]

- Midgard is an option but I like to keep things in 4s for balance but I might change that as counter items are getting more and more diverse.
- Blackthorn does seem a bit late, but change up the order of items and add Oni as an additional item but I'll need to switch out one.
- Berserker and Golden Blade are actually decent on him. While he is more ability based, you would more than likely resort to basic attacking until your combo comes off cooldown. Berserker is nice for the sustain and GB for the movement speed and faster clearing.
- The phases of the game are relatively the same for Horus turtle early, rotate mid, and harass the enemy in the late game.
1
[-]