Bees swarm at the ground target location, creating a new hive that provides movement and attack speed buffs to Ah Muzen Cab. He also heals for a small amount every second while he remains close to the hives. Enemies within 20 units of a hive are revealed to Ah Muzen Cab's team. The hives can only be destroyed by basic attacks (Max 6 hives)

I often see people not utilizing their

Hive setup effectively. Although not every match will be the same (there could be situational circumstances that change the way you will want to setup your Hives), I thought I would provide some general configurations for the inexperienced 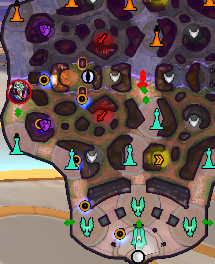 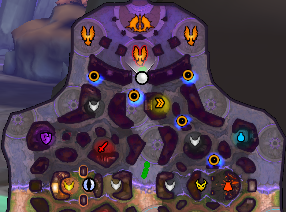 Branmuffin17 (311) | September 13, 2018 8:33pm
This is freaking awesome dude. One minor adjustment that would be more conservative defense would be putting one hive behind your tower rather than near the red. Backup in case the enemy pushes and destroys your purple hive.
1
[-]

Over time I've come to find that each match presents different factors in what the best placement for a hive network would be. Like you said, putting a hive behind your tower would be a more defensive setup with increased reliability.

That being said, the example hive network is shown in more of a general laning sense (neither winning or losing). There are many different configurations you can use. I just wanted to provide some standard examples that will at least serve as a starting point when crafting a network. Newer AMC players can feel this out and then make adjustments based on what feels best to them.

Generally, I do like the hive near red camp for several reasons. It's important to remember that

Hive also acts as miniature wards. This keeps an eye on a high traffic rotation route between mid and duo as enemies will usually detour to check on red camp. With this hive, they will usually be pinged, and if not, you will at least see the hive disappear off the map when they destroy it, indicating enemy movement.

This hive can also be repositioned directly on top of red camp as a ward if your red camp is getting stolen on a consistent basis. In some situations, it can even ward Gold Fury if your team is struggling with warding objectives.

Ah Muzen Cab's kit that many people overlook. Because he has no mobility in his kit other than movement speed, crafting routes and warding with hive becomes an integral part of his game.
Loading Comments...
Load More Comments